Tarot Card of the Month - The Star 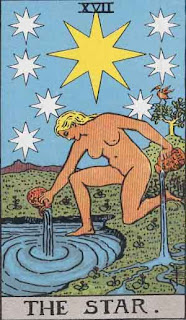 As the world begins to recover from the events of the last couple of years, I would like to introduce the Star card.  This card represents hope for the future after a period of upheaval and turmoil.
The Star card portrays a beautiful woman pouring water from an urn. This is the water of life that gives knowledge to all and the knowledge gives life in return. She is balanced, with one foot firmly on the earth and the other in the water. There are eight stars, all of which have eight points. Eight is the symbol of infinity and is also a power number. The central star is a symbol of Venus as the evening star, thus reinforcing this Tarot card’s meaning of love, peace and hope. The bird in the tree in the background is the sacred ibis of thought, roosting in the tree of mind.
When The Star appears in a spread, it indicates that a period of hardship has finally ended and the querant is now entering a time of rejuvenation. Frequently this card follows a period of illness or change and upheaval.
The Star card is the calm sea after the storm, as it represents tranquility, serenity and peace of mind. It can also indicate a happy ending with the promise of better days ahead. As the Star represents future possibilities, there is still a way to go before true healing has taken place. However, it gives us a glimpse that the future will be okay and with it, our hope for the future is restored.
Key words for the Star – hope, promise, healing, rejuvenation
Posted by Shelley Hall at 8:40 PM No comments: