Tarot Card of the Month - The Chariot 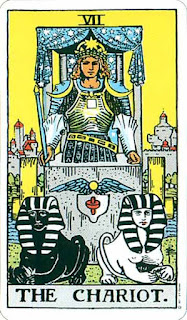 This month’s tarot card is the Chariot. The numerical value of the Chariot is seven and is associated with the astrological sign of Cancer.

An armored warrior stands in a triumphal “car” (chariot). He is surrounded by canopy of six pointed stars representing the celestial influences at work in this card. The crescent moons on his shoulders are outward facing and refer to the formative world. The symbols on his tunic are alchemical symbols, representing the spiritual transformation of man. The square signifies earth, a sign of strength of will. The laurel and star crown indicate the highest attainment of man in spiritual evolution. Black and white sphinxes (sometimes horses) sit at his feet and represent the union of positive and negative forces.

The charioteer holds no reins, just a wand from the Magician card. He controls this through his strength of will in the same way the Magician does. The city is behind him, indicating he has turned his back on civilisation and materialism in order to seek a spiritual path.

The meaning of the Chariot card is conquest, victory and overcoming opposition through confidence and control. It represents a battle that can be won if the Querent has the willpower for it. The battle is usually an external one, with a clear goal and plan of action. Qualities needed to win the battle include determination, discipline, conviction and plain hard work. The steeds represent powerful forces, internal or external, that can be controlled to achieve the goal.

When the Chariot appears in a spread, it signifies that confidence and assertion is required. You need to have complete faith in yourself and know fundamentally who you are and what you stand for. If you have unwavering faith in your convictions then nothing can stand in your way. You will be successful at pursuing your goals, so long as you maintain focus, determination and confidence in your abilities.

Keywords of the Chariot are – willpower, focus, confidence, discipline, success
Posted by Shelley Hall at 12:05 PM No comments: 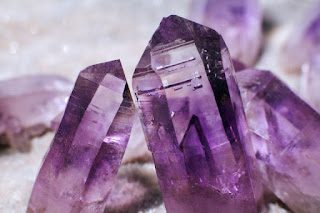 Clients often ask me about crystals and which are best for overall well being. I believe the ideal way to choose crystals is intuitively and for a specific purpose. However, if you want a crystal that covers a wide range of uses, I would suggest Amethyst.

Amethyst comes from the Greek word, amethusos, meaning 'not drunk'. It is a highly spiritual stone that has been used for thousands of years for protection, healing and psychic empowerment. Its violet colour relates to the crown chakra and pineal gland (third eye) and radiates energy which has often been referred to as the purple ray.

The uses and qualities of Amethyst are varied and include:

Some of the healing properties associated with Amethyst include:

Overall, Amethyst is an excellent stone as it repels negative energy and helps us connect to our spiritual nature. For more information about crystals, refer to my earlier post on crystal therapy.
Posted by Shelley Hall at 8:16 AM No comments: