Tarot Card of the Month - The World 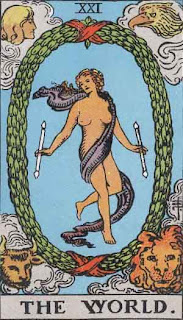 I have chosen to begin 2011 by looking at the World card. It is the last card of the Major Arcana and represents completion. Why begin the year with a card representing completion? Simply, with every ending there is always a new beginning!

The value of the World card is 21 and it is ruled by Saturn. The figures in each corner of the card represent the four fixed signs of the zodiac – Aquarius, Taurus, Leo and Scorpio. They are also symbolic of the four elements, four compass points and four corners of the universe. The card shows a woman dancing within a laurel wreath with red ribbons wrapped at the crown and base. They are in the shape of the infinity symbol, representing continuation. The two batons in her hands indicate balance. They have also been noted as sacred scrolls of knowledge.

When the World card appears in a spread, it indicates that something has come to a successful conclusion. There is a sense of fulfillment and accomplishment with goals being realised. The end is in sight and with it will be celebration and success. It also indicates endings and change. Sometimes travel or a short trip is indicated.

Keywords of the World – conclusion, success, accomplishment and fulfillment.
Posted by Shelley Hall at 3:50 PM